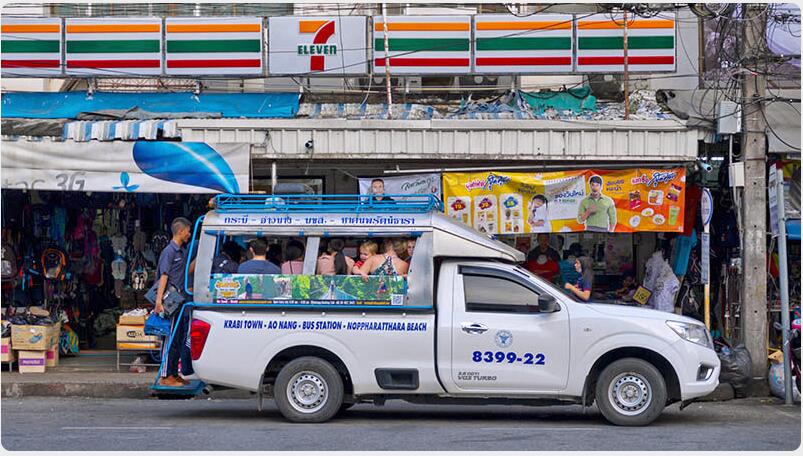 Krabi is a fairly large area, but it is surprisingly easy to move from place to place and it is possible to travel there even after dark has descended better than in some other Thai resorts. The walk is very successful, especially in the city of Krabi, Ao Nang and the nearby resorts. In Railay, by the way, you can’t really go any further than walking, and Krabi has other areas where you mostly walk.

From one location to another such as Ao Nang to Krabi town, you can take a flatbed bus, which is a very convenient means of transportation throughout Krabi. You can take a boat to Railay and the islands, and some kind of boat trip is an integral part of a Krabi holiday. There are also taxis, tuk-aids, mopeds and other rides in Krabi, and you can rent some kind of outing game, the most common of which are bike and scooter. 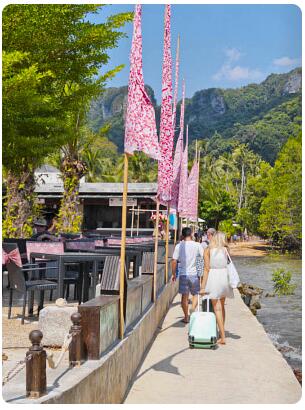 The most popular walks include the seafront promenade of Krabi Town, which is quite long and has a variety of sculptures and great views. Walking is hampered at the piers by vendors of various boat trips, but in Thailand, the intrusion never lasts long and the boatmen are no annoying nuisances.

Elsewhere in the city of Krabi, it is nice to walk and explore the neighborhoods. The city is not large, but significant parts are in a fairly small area. At first, the distances seem long and the block list confusing, but after just a couple of days it is extremely easy to move there. The most difficult walk is the main road (Maharat Road or Maharaj Road), which can be difficult to cross in the early evening. However, it leads towards the finest temple area in the city of Krabi, with many shopping malls, eateries and more. On the other side of it, apart from the temple area, there is not much anything interesting, and walks are worth focusing on between the river and the main road.

Ao Nang’s long promenade and the adjacent promenade are also a place to walk a lot. You can walk long distances along the beach, and if you leave from the wigs of Ao Nang, you can walk more than five kilometers to the tip of the peninsula along Hat Noppharat Thara beach. The road passes the national park and has numerous eateries and cafes along it. Noppharat Thara Peninsula is one of the highlights of the area and well worth a walk. From there, however, it is important to pay attention to warning signs that warn of animals, jellyfish and thieves.

If you want to travel longer distances, Krabi has, like elsewhere in Thailand, open-air buses (songthaew) that depart from certain places. It is advantageous to take a flatbed bus, but its departure can sometimes have to wait a long time and it runs slowly, as it satisfies and ensures that everyone understands that there is a ride on offer. Thus, a flatbed bus can be turned into a flatbed taxi , in which case it is taken into its own use in a charter style and the driver is told where he wants to go. One can go a short distance, even just from Ao Nang to a nearby beach, or you can even tour all day and visit different places.

Both a shared platform and a platform that wants to be chartered can be stopped anywhere. Shared flatbed buses can occasionally fill up completely, but usually can accommodate them.

The actual open-top bus routes take you from the city of Krabi to the bus station, Noppharat Thara, Ao Nang, Ao Luk and some other places. It is always a good idea to take a paper map of Krabi and the city of Krabi from a hotel, travel agency or elsewhere, where you can show the bus driver, for example, where you are going. Sometimes the trip is paid for before it starts, sometimes only at the end of it and everything quickly becomes clear. For flatbed bus rides, it is good to have a small amount of money, i.e. 10 baht coins and 20, 50 and 100 baht banknotes. They’re handy anyway, and it’s a good idea to break large banknotes at large stores, hotels, or stores like 7-Eleven. In Krabi, open platforms can be moved a little later than elsewhere in Thailand, and Ao Nang can be reached until 10 p.m. Charter-style open platform can be moved at any time, but in the evenings and at night prices go up.

The bus station bus leaves from the promenade, at the corner of the street along which the market hall is located. It has access to any place in or near the direction of the bus station , and the drivers and other people at the stops are nice and helpful. A ride to the bus station costs 50 baht.

The city of Krabi can be reached via Noppharat Thara along Ao Nang from the main street ( Maharat Road), in front of the 7-Eleven store next to Vogue Shopping Mall. The price usually comes to 50 baht, but it can vary depending on where you go. The driver has to say exactly or show on the map if he wants the exact place, and if he is not sure where Ao Nang wants, he has to get off the ride to press the stop button on the roof and pay for the trip.

Ao Luk can be reached from the same main street, a few blocks away, at Soi 12. The journey is 45 kilometers, it takes 50 minutes and costs 60 baht in its direction. The open platform to Ao Luk will stop after 3 p.m.

Mopota taxis , which are always opposite the Krabi Market Hall, for example, are easy to identify thanks to the orange vests. They are happy to take you anywhere in the Krabi town area and beyond. It is advantageous for the moped to move, but it is only good for one person and it is difficult to travel longer than 10-15 minutes behind the moped.

In addition to mopota taxis, there are side-moped mopeds (sam-lor) and larger tuk-supports that carry 3-4 people . Like a mopota, they take you somewhere close, and it is not worthwhile, as in an emergency, to move between the city of Krabi and Ao Nang, for example. A moped with a sidecar should only be boarded by a maximum of two people. In addition to the city of Krabi, there are many such rides on offer in Ao Nang and Klong Muang.