Salzburg, Austria is a historic small town surrounded by mountains.

Salzburg, Austria’s fourth largest city, is the country’s most popular travel destination. Known as Mozart’s hometown and the setting for The Sound of Music , Salzburg is an idyllic city destination that attracts with its alpine scenery, architecture and quality restaurants.

SALZBURG AS A DESTINATION 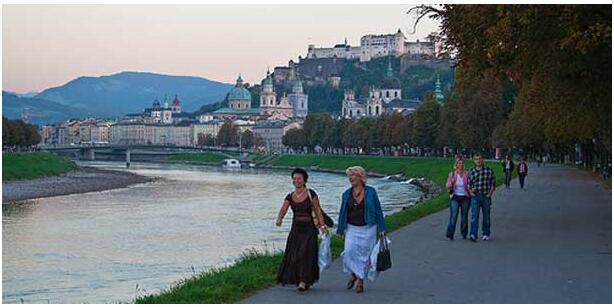 The center of Salzburg has remained virtually unchanged over the years. The UNESCO-listed center is teeming with beautiful Baroque architecture, churches and palaces. The nature surrounding the city is like straight from the best postcards with their alpine peaks and undulating mounds.

In addition to architecture, music and art life as well as food culture flourish in Salzburg. The city is especially home to cultural tourists and couples looking for an idyllic or romantic atmosphere on their trip.

Salzburg, or “salt mountain,” is named after a salt fort on a high mountain. The Hohensalzburg Fortress is one of the largest medieval castles in Europe and is today a self-righteous symbol of Salzburg.

A city of music and culture

Salzburg is famous above all for its music. The city is known as the birthplace of Wolfgang Amadeus Mozart, and the picturesque scenery of the area depicts the famous musical The Sound of Music.

Mozart is widely used as one of the symbols of Salzburg, and there can be no difference in composers in the city. Namely, Mozart-themed chocolates, postcards and books are on sale everywhere.

In addition to tourist products, Salzburg is full of classical culture. Classical music concerts are held in churches and numerous concert halls, and the theater is also well represented in the cultural offerings. An example of the Salzburg Museum, the Museum of Modern Art is well worth a visit.

Salzburg’s Old Town is bustling with life. In addition to small shops offering shopping opportunities, the city’s restaurant and café culture is booming. For example, Cafe Tomaselli on Alter Markt has been operating continuously since 1705.

In Salzburg, feel free to try the eateries to suit your budget and stop to spend some leisurely time in the cafés, which are an integral part of Austrian culture. In the restaurants, places of all levels are represented: from pubs offering affordable food to the best restaurants in Austria.

Eating and drinking in Salzburg is somewhat cheaper than at home. Likewise, shopping is usually a little cheaper. 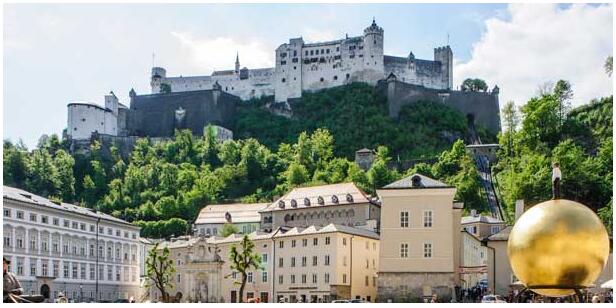 For a day trip to the surrounding nature

Salzburg’s location in a scenic location is worth taking advantage of, for example, hiking in the surrounding mountains or visiting the many small towns around it.

Bicycle rental offers good opportunities for nature hiking. There are numerous bike rentals in Salzburg, and the bike quickly whips up The Sound of Music’s natural scenery. There are also good and comprehensive cycle paths in and around the city.

A trip to Salzburg during the events

Austria is known for its numerous events and festivals, and Salzburg is no exception. If the schedule fits, the city should aim for a local event.

The Salzburg Music Festival is even considered one of the best classical music festivals in the world. There will be five full weeks of opera and concerts in July-August.

FLIGHTS, ACCOMMODATION AND MOVEMENT IN SALZBURG

Flights from Helsinki to Salzburg

There are currently no direct scheduled flights to Salzburg from Helsinki. However, several airlines, such as Austrian Airlines, Air Berlin and Lufthansa, offer the option of getting there by exchange. The travel time then varies between about four and seven hours, depending on the length of the change and the place of change.

Alternatively, it is easy to travel to Salzburg by train from one of the nearby cities, to which you can fly directly. Good options are especially Vienna or Munich.

As Salzburg is a popular destination, the city has a lot to offer due to its size. Still, especially during the summer season, Salzburg hotels can be very crowded. It is a good idea to make a reservation well in advance.

Accommodation in Salzburg is available in all categories: from hostels to international luxury hotel chains. Many tourists find a pleasant accommodation in the middle-class guesthouses, of which there are many in Salzburg.

As Salzburg is a small city, accommodation can also be viewed from outside the historic center.

Salzburg is best served on foot, as the historic center is closed to cars and the distances between attractions are not long. Bike rental offers a good alternative for walking, as there are many bike rentals in the city and the bike path network is good.

Public transport in Salzburg is built on a bus network that works well. Tickets can be purchased from the drivers.

The magnificent castle of Hohensalzburg

Hohensalzburg Castle is one of the largest, oldest and most spectacular medieval fortresses in Europe. An invincible white castle proudly guards Salzburg from the top of a high mountain.

Today, the castle serves as an interesting museum, and for the tourist, an absolute experience is climbing up to the castle along steep stairs and winding walkways. If the condition does not last all the way to the top, resort to a part of the lift ride. The hassle of grabbing is rewarded with stunning views down to the city.

The beautiful baroque buildings and churches of the old town

Salzburg’s Old Town is full of lovely sights. The UNESCO World Heritage Site is known throughout for its fine Baroque architecture and many beautiful churches.

The most famous of the churches is the 17th-century Baroque-style Salzburg Cathedral, known as the Baptist Church of Mozart. When completed, the Salzburg Cathedral, rose north of the Alps among the most important church buildings and church architecture largely influenced by the development of the region.

The Old Town is the best thing about Salzburg in the sense that, despite the great historical sights, an excessive outdoor museum atmosphere cannot be created. This is guaranteed by numerous cafes, restaurants and shops, among whom is simply nice to move around on foot.

Getreidegasse is one of Salzburg’s oldest streets and a lively shopping street. In its house number 9 is Mozart’s birthplace. Mozart lived in the house until he was 17 years old, and today the building serves as a museum. The house is also probably the most photographed building in Salzburg.

Mirabell Palace is located just outside the old town. The Baroque Palace is one of the most popular places to visit in Salzburg. There is also a baroque museum in the area.

Mirabell Palace is surrounded by geometric flower plantations and numerous sculptures inspired by mythology. There are also many fountains in the garden, and the palace offers great views of Salzburg’s Old Town and Hohensazlburg Castle.

The Werfen Ice Cave, a few kilometers from Salzburg, is the largest ice cave in the world.

The ice-dominated corridors of the cave dazzle with their beauty and offer a journey into a completely different reality. The cave is located on a mountain near the small town of Werfen.

THE BEST OF SALZBURG

Experience these in Salzburg

The best places to eat in Salzburg