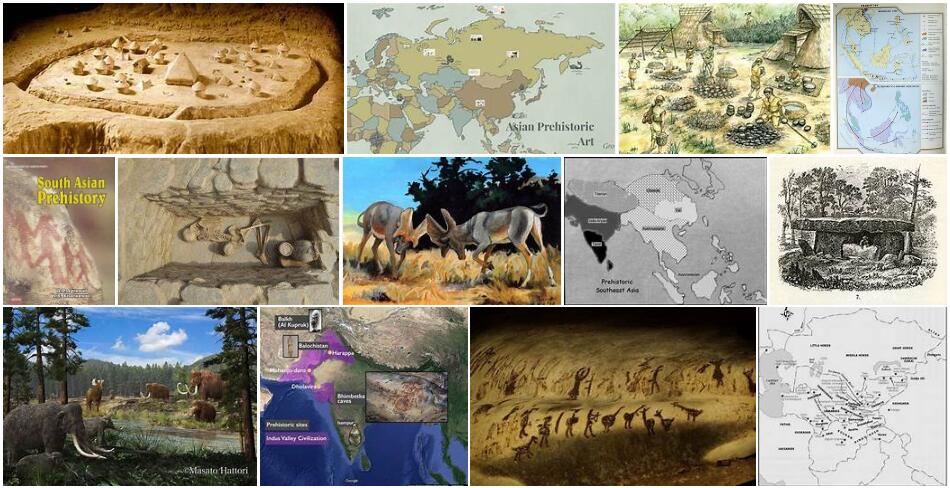 While in Africa one can follow the very first traces of man, it is in Asia that one finds the earliest highly developed societies. From this we know the first testimonies of farming and cattle breeding in the world, the first use of metal and the oldest writing. The development of culture went different ways in the different parts of the continent, whose varied nature offers very different living conditions – from the Arctic Ocean in the north to the belt of the monsoon in the south and from the deserts and steppes of Central Asia to the rainforests of Southeast Asia.

According to AbbreviationFinder.org, the oldest finds from Asia date approx. one million years back. Tools from the Oldowan culture and from the older acheulé are known from Ubaydiyya in Israel. The oldest representatives of the species Homo erectus found in China are the skull from Lantien, ca. 0.8 million years old and older than the Beijing man from Zhoukoudian, whose age is estimated at between 0.5 and 0.25 million. year. Javanese man is considered as old as found from Lantien, ie. between 0.9 and 0.7 million year. In older mansion politics, various tooling cultures existed: the Acheulé with handles in West Asia and parts of India and a culture, Soan, based on pebble tools in most of India and Southeast Asia.

From 200,000-90,000 years ago, both eastern and western Asia are known for so-called archaic Homo sapiens types from, for example, Dali in China, as well as Zuttiyeh and Qafzeh in Israel. They usher in the transition to the Middle Palaeolithic and thus to a more developed culture, the mosquito. In this era, ca. 200,000-40,000 BC, human physical development went in different directions. The Neanderthal lived in Europe, Western and Central Asia, where funerals occur for the first time. In the other parts of Asia, the development of Homo erectus over early Homo sapiens types to the modern man. By the end of the Middle Palaeolithic, human settlement existed across much of Asia. The lowering of sea level during the last ice age enabled immigration to Japan for approx. 90,000 years ago.

In the younger mansion, ca. 40,000-9300 BC, all of Asia was populated by the living human type. Off for approx. 32,000 years ago, Siberia’s steppes were inhabited by a people who hunted mammoth, wild horse, reindeer and bison. At a settlement in Malta near the river Angara, for approx. 23,000 years ago made small female and animal figures of mammoth tooth. The oldest Siberian rock paintings with animal motifs are from Younger Palaeolithic. The lowering of the sea during the last ice age enabled immigration from Siberia to North America across the Bering Strait. In the warmer parts of Asia, the population became more dependent on plant food, and some of the traits that characterize later farming communities came to fruition. In Japan, cut stone axes from approx. 25,000 and ceramics, the oldest in the world, from approx. 10,000 BC.

At the end of the Late Palaeolithic (epipalaeolithic), ca. 12,000-10,000 BC, the Natuf culture was widespread in the Near East. People lived in villages, collected wild cereals and hunted wild sheep, goats and gazelles. After approx. 9000 BC there were early Neolithic villages in the Near East whose inhabitants cultivated wheat and barley and kept domestic animals, but did not yet produce pottery. Settlement mounds (teller) testifies to permanent settlement from 9,500 to 9,000 BC, such as Jericho in the Jordan Valley, Abu Hurayra in Syria and Tepe Guran in Iran. From 8500 BC were found in the small hills of Asia Minor, for example Cayönü Tepesi and Can Hassan, and 7000-5500 BC created the first urban communities to witness developed social, economic and religious organization, such as Çatal Hüyük in southeastern Turkey. In the period 5500-3000 BC complex social systems were developed in West Asia. Temple cities characterize the Ubaid period, and in subsequent periods Uruk and Jemdet Nasr emerge Mesopotamia’s first states. The oldest wedge writing is known from Uruk ca. 3500 BC.

While cold-hammered copper was known in the Near East before 7000 BC, forged copper became common after ca. 5000 BC and bronze from approx. 3500 BC Natural deposits of copper and tin were exploited in other parts of Asia for the production of bronze 3000-2000 BC. The iron first used by the Hittites in Asia Minor extended to the other parts of Asia towards 1000 BC.

In India and Pakistan, arable farming and cattle breeding are known from 7000-5000 BC A highlight was reached with the Indus culture, ca. 2500-1700 BC, whose cities were centers of crafts and commerce and for the cultivation of barley, wheat, rice, millet and cotton. First, approx. 700 BC arose around the Ganges River a number of urban states which, like other centers in the Indian Peninsula, were engulfed by the Maurya dynasty 400-300 BC.

In Turkmenistan, farming began 7000-6000 BC with the Djeitun culture. On the steppes of Central Asia lived from approx. 2500 BC a semi-nomadic people who domesticated horses and camels buried their dead in burial mounds and from Andronovo culture ca. 1500 BC bronze used. From the Steppes were the expansive nomadic people who from 800-600 BC are known as gunmen and sarmatians. From Pazyryk in Altaj, the rich first tomb is known from 500-300 BC. According to Countryaah, Asia is the world most populous continent.

In northern China, the oldest Neolithic village culture, Yangshao, which was based on millet cultivation and pig farming, can be traced back to ca. 7000 BC During the Longshan culture, 2500-1800 BC, larger fortified urban communities and signs of the emergence of an armed elite existed around the Huang He (Hwang Ho) river, pointing towards the Shang dynasty.

Rice cultivation began in southern China approx. 6000-5000 BC and in Southeast Asia approx. 2000 BC The use of metal was known in Thailand and Vietnam from 2000-1500 BC, but first developed significantly in the Dong Son culture with the use of iron. From this time, fortified cities emerged and centralization began. It continued around AD when the first temple towns were founded in the Mekong Delta, from which trade with other kingdoms in West and East Asia was conducted.

Both before and after the introduction of rice cultivation on the floodplains of Thailand, Vietnam and Cambodia there were hunters, collectors and fishermen who used simple stone tools, the so-called Hoabinh culture, which is known from kitchen encounters on the coasts and from the rocky caves that supplemented the hunt with plant food collection. In northern Thailand, Indonesia and the Philippines, some peoples have lived at the Stone Age level right up to the present day.

In Japan, thousands of kitchen meetings originate from the Iomon period, whose population lived from fishing, gathering and hunting, until farming began to grow wheat and beans. 4000 BC Millet was grown from ca. 1000 BC and rice from around 300 BC Bronze and iron were first used extensively during the Yayoi period, 300 BC-300 AD, as a result of influences from the Han Dynasty in China.